Before the break we received a new rig so we were able to start work on doing final animations but it had some problems so we took a few days to try and address them. 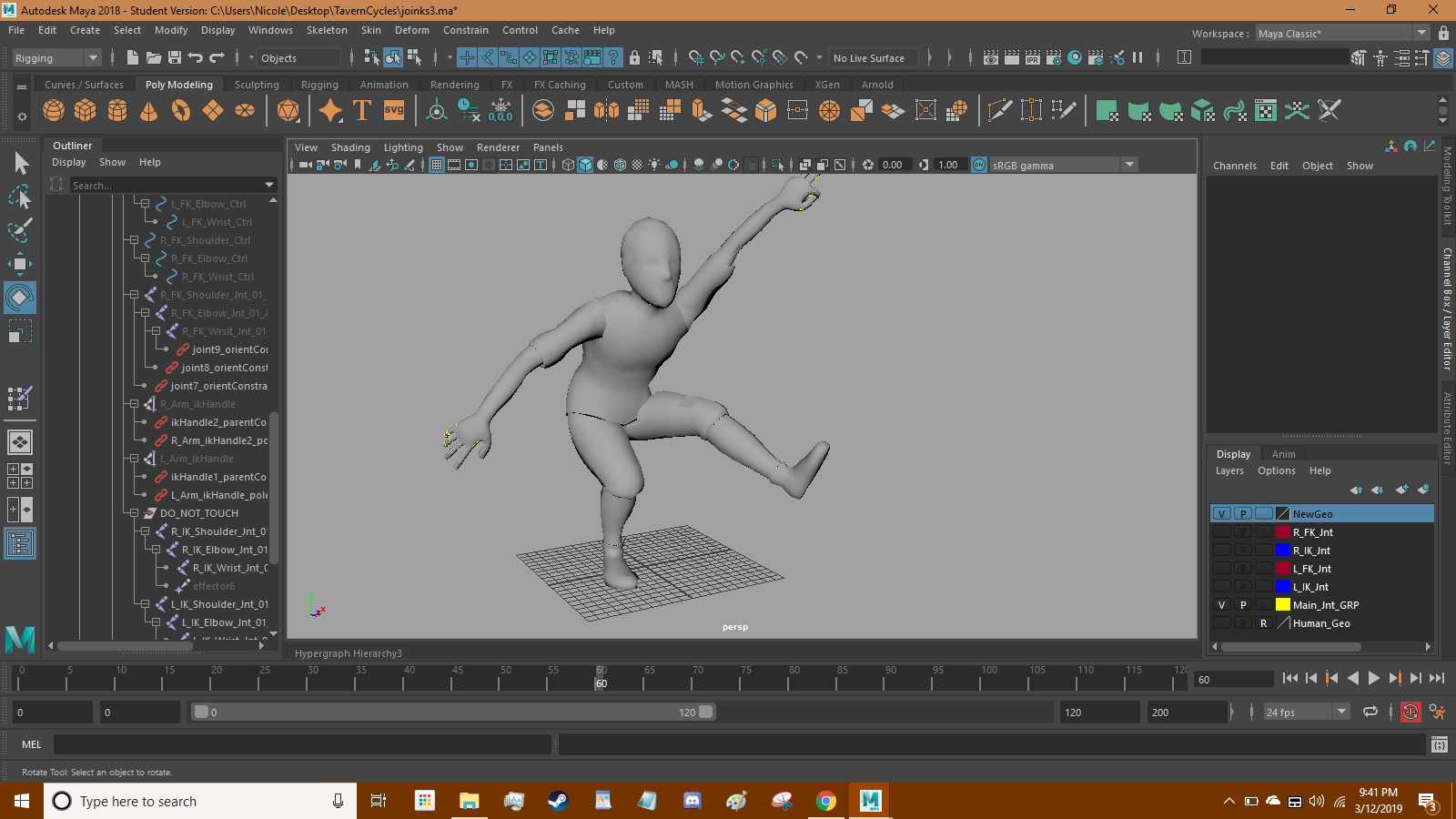 Then since we had a rig that was pretty much working we went ahead and started finalizing our animations.  I had gone through a few iterations of animations to fix things that needed refining.

Our new rig came came with the much needed fk spine but lost some more of the detailed controls One of the biggest problems was with the wrist controllers. While I went in and fit our rig's skeleton to the newest human model (the rigger had never received a new model and rigged the old model) another one of us fixed the wrists and foot controllers. W e lost some control with the fingers but it wasn't too much of a problem for my animations.

Currently I am working on taking the animations I just finalized for the Sassy Character into Unity and setting up an animation controller for it so it can be moved to the programmers for use in game.

I completed all the work I was tasked with recently. The blockout for personalities were actually from sprint two which I ended up taking a while to finish because I had initially been working on trying to improve the rig. I ended up handing that work over to the class rigger because he had finished working with builder's brawl's rig. I shifted my focus to the blockouts and the storyboards for Ladling Soup and Pouring Beer.

Working on my blockouts for sit to stand and vice versa revealed the problems with the rig I made, especially with the the spine. The thing that bugs me the most as an animator is the inability to make the C curves I'm used to making in the spine. We have a the rig being reworked by the class rigger and with the improved rig I'm hoping we'll be able to show a more smooth movement from those two cycles when I move into working on the final versions of it.

Currently Working on the

As an animators of My little Tavern Shop, the first thing we were assigned to do was to storyboard and create a block out idea for the opening cinematic for the game.When we met again we took our ideas and combined them. With Alex working on using Maya to show it it in action with blocked out movement of the patrons.

Issues/Problems/Solutions encountered
The group volunteered to learn more about rigging in order to try to make our own rig. I finished the tutorials first so I went ahead and attempted to create a rig. It took a lot of work, and I had ended up finding a decent amount of outside sources to figure out how to make a rig that would suit our needs. The others also started working on personalities they could create for patrons of the tavern using the body mech rig.

After many iterations I finished IK rig. I couldn't at this time figure out how to a set up that would switch between the two but I figured IK was more necessary for the legs and arms at least. The only thing I wasn't able to do was make him bend at the waist more so I asked the human's modeler to add more edge loops so in the next iteration I  could make him bend more at the waist.

Currently we are now assigned to particular personalities and have a checklist of cycles we should be trying to make.
I have the sketchy personality and I have been watching clips from the scene in Star Wars at the Mos Eisley Cantina for ideas for it.